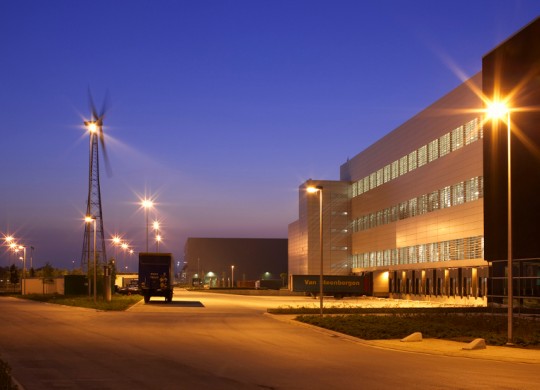 What a location! In the past if you took the highway from Hasselt to Antwerp, you couldn’t miss the enormous storage and distribution buildings of Nike in Laakdal. By building a wind farm and a new logistic building even closer to the highway Nike has topped it now. Nike is doing very well and is happy to show it. Nike Equipment – that’s the name of the new building – is a good illustration of Nike’s success. Bouwen aan Vlaanderen visited the project with Donald Desmet, architect MScEng of signum+.

Nike’s Customer Service Center already had two logistic buildings, one for shoes and one for clothing. Since the distribution of the ‘equipment’ goods for Europe, the Middle-East and Africa – EMEA in short – was to be transferred to Laakdal, a new logistic building for this third group of products was needed. After a request for quotation limited to six candidates the complete commission of architecture and engineering was assigned to the temporary association Technum-Signum. The two companies regularly work together for this type of project. Technum mainly took on stability and engineering while Signum accounted for project management, architecture and spatial coordination.

The windmills show that durability isn’t an idle word for Nike. Although the construction of the wind farm – a design by Areadis and SeeBa – stands apart from Nike Equipment, it certainly had its consequences for the new logistic building. “With this wind farm Nike wants to generate enough green energy to power its complete site”, Donald Desmet explains. “A difficult exercise with an important implication for us, since this goal can only be achieved if the building we designed is extremely energy efficient.” On the other hand the low energy consumption was not to be realized at the expense of comfort. Since the activities in the two original buildings are perfectly comparable to those of Nike Equipment, the designers had an ideal reference. In hot periods in the summer it is sometimes necessary in the other two buildings to give the employees a heat break. This had to be reduced to a minimum in Nike Equipment, but without using an energy consuming air conditioning unit.

“We managed to ensure a comfortable heat climate by using very thorough insulation and natural ventilation through a ground coupled heat exchanger,” Donald Desmet claims. “By using this technique a cooling installation is unnecessary and it still enables us to reduce the risk on heat peaks to a minimum. This guarantee results from the dynamic simulations of the interior climate we did. Depending on the outside temperatures and the use of the different rooms we are able to accurately determine the inside temperatures.”

The building consists of three parts: a high bay warehouse, a low bay warehouse and a smaller building which houses the offices, the cafeteria, the changing rooms and other functions. Every building, every function has its own design and use of materials. This raises the readability and breaks the unity so that the building – despite of its proportions – appears less imposing. The high bay warehouse (30 metres high, 75 metres large and 160 metres long) mainly consists of high racks which are refilled in a fully automatic way. The real handling happens in the low bay warehouse, which is however also 28 metres high. It is divided in three building layers. The employees in this building are engaged in the reception, the shipping and the packing of the goods. The high bay and low bay warehouse are in line with one another but can be distinguished from one another on the outside by their respective white and grey aluminium cassettes.

“The cladding consists partly of profiled plates like on the original buildings, but also partly of aluminium cassettes. Since Nike Equipment, even more than the first buildings, should be an eye-catcher along the highway, we chose to use, especially on the most visible façade, a representative cladding with aluminium cassettes. In this way we were able to create a design which matches the existing buildings, but which also has its own character”, says Donald Desmet.

The rigid aluminium cassettes are nicely in contrast with the brick building which houses the offices and social activities. “The use of bricks is new on this site”, Donald Desmet explains. “The choice to construct for all supporting and social activities a separate, attractive building with enclosed garden which should have an inviting effect on the staff, was deliberate. And to avoid too large walking distances several functions which are present in the main building can be found here too.” By bringing together all these facilities in one separate building with its own ventilation and air conditioning it is easier to perfectly adjust these techniques to the function and the size of the building. It is also possible to add extra floors to the existing building later on without hampering the logistic activities. For the actual logistic buildings flexibility in view of possible extensions in the future was also an important point of interest. Because now the second building and Nike Equipment are completely separate, but in the future it will easily be possible to close the open area between both buildings, thus creating many new square metres of working floor. It is clear that Nike Equipment is far from Nike’s endpoint.