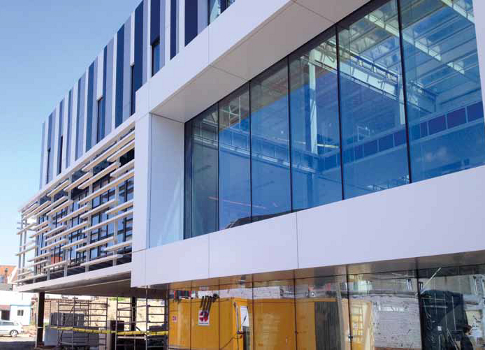 Masterplan and Office Building TMVW, Ghent
01.04.2012 Back to overview

“The design process of the new TMVW offices in Ghent was very interesting and instructive. The definite plans were not easily realized, several adaptations were made during the process. Together with TMVW we mainly searched for smart and rational solutions which increased the quality and livability of the building and its surroundings. The program included among others a compact volume, large free spannings, a balanced choice of materials, the creation of atria to increase the illumination angle, extensive insulation, awning to restrain the sunlight and the use of borehole thermal energy storage. In this way we created an innovative building which answers in a flexible way to the user’s needs,” Donald Desmet of signum+ architects, the designer of the building opened.

“In a first phase we demolished the old workshops and garages. Then we built a new workshop for suction vehicles. The new office building – 5.000 m² large – has a compact volume with four building layers. The first two building layers, of which the first is located below ground level, were meant as parking area for 160 cars. Mobility is an important theme at TMVW. None of the staff has a company car. 40% of the staff comes to work by foot or by bike. To avoid possible hindrance in the neighbourhood TMVW preferred a parking area on its own site, while bike-riders have the use of a large bike parking. The two top building layers comprise landscape offices and a couple of individual offices, a meeting centre containing ten meeting rooms and an auditorium for hundred people. As a result of differentiated entrance control the meeting centre can also be used outside working hours.”

“The combination of budgetary conditions and a specific energetic concept incited us to make a compact design. Although the footprint is limited to 43 x 60 meter the building has a very open character, resulting from among others the large number of cut-out atria in the square design. As a consequence all offices enjoy incident daylight, which is certainly not unimportant, considering the fact that lighting takes up about 40% of all energy.”

“The new TMVW building – housing a staff of about 250 – is the first office complex in Belgium which has a Slimline floor produced by Cordeel. The system combines a ceiling, installation room and a top floor using an 80 mm pre-cast concrete ceiling plate in which steel profiles are included. The ceiling plate holds the piping for heating or cooling the room. The system saves 40 to 50 cm in height per floor. As a consequence seven floors could be built whereas the height would normally only allow six floors. Due to the Slimline system it was possible to realize within the steel structure spanning of more than sixteen meter. Moreover the spanning allowed us to integrate the piping of the technical installations for cooling and heating in the complete depth – 720 mm – of the floor. In this way the Slimline system fits perfectly in the cradle-to-cradle concept. Via ‘open zones’ with removable tiles at the top it is possible to change installations and adapt the function of the building. And since all walls are moveable the existing space can easily be rearranged if necessary. This multifunctional character lengthens the service life of the building.”

“To heat and cool the building we used BTES-technology (Borehole Thermal Energy Storage). In this case 32 boreholes were made to a depth of 140 meter. In winter the building extracts heat from the ground. During the summer the cooling is done by sending the heat from the building into the ground. 75% of the energy need is met by using this process. The remaining 25% is gained from classic heating systems which can also meet possible peak demands. The payback period of the heating system is nine years. On the roof solar panels were placed, delivering 170 kWp. The compact layout of the building and the high insulation level of the building shell result in a K-level (insulation level) of only 24.”

“All meeting rooms are centralized in one area enabling efficient ventilation management. The building has mechanical ventilation with hygienic ventilation flow. Rooms are heated or cooled by blowing in air. To limit the effect of direct sunlight we installed metal awning with fixed horizontal lamellae placed closer to or further from one another, depending on the orientation.”

Integration in the neighbourhood

“TMVW found it crucial to integrate the building as much as possible in the neighbourhood. So we chose an open volume to preserve the contact with the neighbourhood and to avoid the impression of a massive building block. The square in front of the offices is distinctively green and functions as a public area,” Donald Desmet concludes.